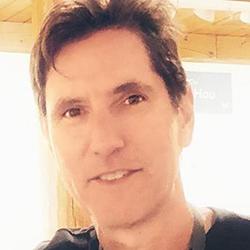 Brian Sindler was born in Chicago in 1957. He received a bachelor of arts from Columbia College in Columbia, Missouri. Working as a musician for years, he did not take up art until he was into his thirties.
Sindler began classes at the American Academy of Art in Chicago in 1996.  From 1997 through 2001, he was enrolled at the School of Representational Art, a French-style atelier in Chicago.

In 2004-2005, while pursuing new opportunities for artistic experimentation and growth, Brian entered into what would be considered a more tonalistic phase of his career. Whether in the studio or plein air, his work became more characterized by the use of subdued palette, the flattening of the pictorial space and a thinner paint application with broad bands of color. Going forward Brian has become very comfortable taking liberties with both form and color.

From 2012 to current, Brian has produced an amazing body of paintings that are clearly influenced by the American Tonalistic movement of the late nineteenth and early twentieth century. This work is somewhat more painterly and less abstract, although the forms are still highly simplified. In these paintings, formal considerations take a back seat to contrasting tonalities and color harmonies. The effect is both poetic and sublime.

Brian Sindler has exhibited widely in individual and group shows. In addition to gallery exhibitions, he has been a regular exhibitor at the Salmagundi Club in New York, the Plein Air Festival in Door County, Wisconsin, and the Cedarburg Plein Air Competition. He has been awarded numerous prizes in these competitions.