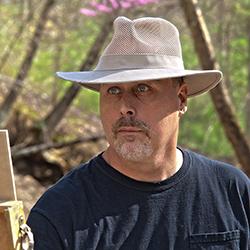 Chuck Marshall (Charles W. Marshall, Jr.) was born in Wilmington, Ohio, on December 7, 1957. The small town of New Antioch, about 7 miles outside of Wilmington, became home to Chuck, his one brother, five sisters, mother and father.

The surrounding area was known for its agriculture - mainly hogs and corn. So Chuck grew up working farms and spending time in his father's construction trade, but Chuck knew he wanted to do something different with his life - he knew he was going to be an artist from a very early age. He would spend hours each day sketching images of fields, hillsides, and animals that he would see while roaming the countryside.

He studied one year at the Art Institute of Cincinnati before studying at the California Art Institute in Southern California. His art career includes many years as an illustrator and graphic designer as well as his fine art.

Chuck has won numerous local and national awards, and has also performed as a judge in many juried art shows.