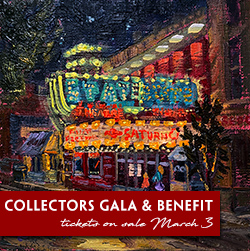 Be among the first to view and shop the Paint Grand Traverse juried collection, and support Crooked Tree Arts Center - Traverse City! Tickets on sale March 3!

Michael Clark was born and raised in Traverse City, Michigan and earned a BFA in painting from Kendall College of Art and Design. After college, Michael moved to Austin, Texas where he started  showing his work in galleries and winning awards at regional plein air events including back to back “best of show” at the 2010 and 2011 “Paint The Town” show in Marble Falls, Texas.

After the passing of his father Michael decided it was time to take his art to the next level. That journey led him to Chicago to study at the prestigious Palette and Chisel Academy of Fine Art, then to The Art Students League in Denver, Colorado.

In 2014 Michael became a teaching assistant to famous Colorado impressionist Don Sahli. Don gave Michael the freedom and knowledge to explore color and handed down a lineage of Russian Impressionism dating back centuries.

After doing his art part time for several years Michael became a full time artist in 2016 and in 2018 opened his own gallery, The Michael Clark Gallery and Studio in Salida, Colorado.

Most recently Michael won third place in the American Impressionists Society’s 2019 small works show at the Crooked Tree Arts Center in Petoskey, Michigan and later that year was named a Signature Member within the organization.