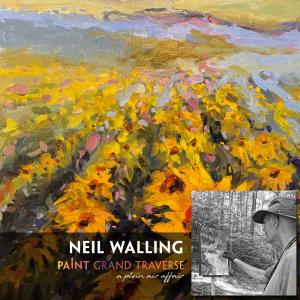 Neil was born and raised in Southeast Michigan. He graduated from Art Center College of design in 1966 and had a career designing cars for Chrysler Corporation. In the mid ’70’s he explored fine arts watercolor painting and was represented by several galleries but career pressures led him to put a hold on this until retirement in 1999.

Since retirement he has developed a second career as an artist working primarily “en plein air”. He has entered many plein air events and has won over 40 awards. He has taught over 20 painting workshops and has led groups of artists on several international painting trips. He has also put together several books on painting as well as illustrating two children books written by his daughter, Kimberly Taylor.

Neil and his wife, Sandi have been coming to the Grand Traverse area for nearly 50 years and have a place in Suttons Bay where they spend their summers.

“There is nowhere that I’d rather be then here in the Grand Traverse area each summer. I never tire of painting the rolling hills, beautiful blue water and interesting small towns. This area is an artist’s dream waiting to challenge the imagination and skill on every painting.”

Neil paints in watercolor because he loves the freshness and clarity the medium allows and oils because of the visceral emotion of the brush and palette knife on the canvas.