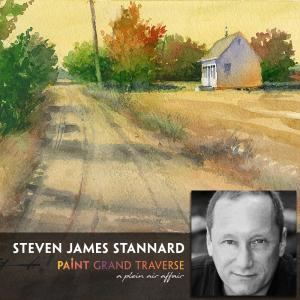 Steven James Stannard has earned a remarkable reputation as artist, illustrator, and Landscape Architect. As  illustrator, his images have been published across the country. As artist, his paintings appear in dozens of private collections, while his landscape and planning designs are found throughout Maryland, D.C. and Virginia.

Steve began his career in Detroit, Michigan near thirty years ago. Earning both a Bachelor of Science in Geography and a Bachelor of Landscape Architecture from Michigan State, he embarked on a successful career as Landscape Architect and urban designer in the Baltimore- Washington region. Somewhere along the way, Steve realized the value of the illustrations he was producing in conjunction with his projects, and in 2001 he opened his studio- The Salient Group- to design and produce architectural illustrations and fine art. Today, he maintains an open studio in Front Row Center in Traverse City, Michigan.

Steve’s fine art follows a pattern complementary to his design and illustration work. He paints what he loves- the built environment. Fascinated by what people have contributed to the landscape, he works in oil and watercolor to produce images that evoke familiar emotions, those of home, of work, of family. Steve often works from life, and typically paints just where he is at the time. “I never leave the sketchbook behind. Painting in the moment allows me to explore the lives of others as they go on about their day, doing what people do- build things.”