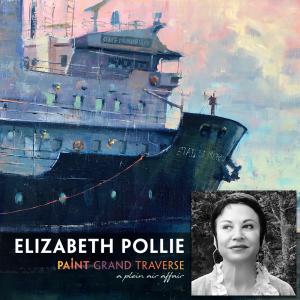 Elizabeth Pollie’s personal art history extends back decades. Art as a path, a language and a personal frontier has been present from the time of her childhood. Her parents exposed her to the arts as a child and encouraged her to follow her interests. She earned her BFA from The College For Creative Studies where she later taught.

Her interests led her into the field of editorial illustration. The 1980’s were a rich with greatly imaginative artists who honed both their conceptual and representational skills in the world of illustration.  Ms. Pollie’s work was nationally published and awarded. As illustration began to fade from magazines and book jackets her focus upon representational painting became central.

The intrigue and intimacy found in observing the surrounding world provides me with ceaseless inspiration. There is a great sense of freedom as well as a spirit of discovery that is derived through the act of painting. My emphasis is based on finding and teasing out a sense of poetry, mood and depth. I want to believe that what binds humans as a species is an inward call to experience the sublime even in the most ordinary of things. Art is an outward expression of that desire.

Pollie’s work has received a strong reception in the art world, collecting numerous awards as well as media coverage.

She lives and works in the waterside town of Harbor Springs, MI. along with her husband, three dogs and a steer named Egbert.