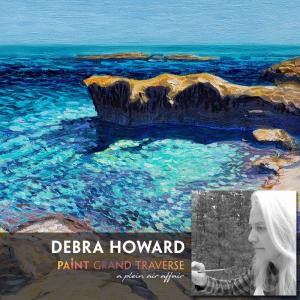 Based in
Omena, MI

Debra Howard has been an artist and adventurer her entire life. She spent her childhood in Miami, Florida, where she  first discovered her love a air with color, light, painting, and sailing. She studied at Ringling School of Art in Sarasota, and began her art career in San Francisco, where she opened her  first illustration studio. After 17 years as a successful illustrator, she closed her studio to concentrate on fine art painting. “I realized that the career I had found so satisfying was being taken over by the computer. I missed the feel of the brush on canvas.”

In response, she provisioned her Peterson 44 sailboat with art supplies, her old dog and her 4 year old daughter and began cruising. After almost 27 years of traveling, sailing and painting aboard, Ling Ling, she has come ashore and has turned her creative focus to painting the Eastern Shore and the Leelanau and Old Mission Peninsula in northern Michigan.

Her introduction to the Eastern Shore came by way of Tangier Island. A tiny, remote island in the middle of the Chesapeake Bay. She lived there for 3 years, as the artist-in-residence and then as the Executive Director for the Tangier History Museum. She accomplished the task of painting a painting a day to document the seasons and changes on this disappearing island. Her work was featured in The American Scholar Magazine. The experience changed her; “I paint now with more energy, passion and immediacy,” Howard says, “which coincidentally reflect the very nature of the island. The island is raw.”

After years of traveling and painting from a sailboat she switched from sailing to camping. “I now travel from April to November exploring and participating in Plein Air events in my little RV trailer with emphasis on norther Michigan. I am especially inspired with the Traverse Bay and Lake Michigan area of the state and now live in Omena from July to late September where I paint and teach art workshops.

She was voted Best Visual Artist in Charleston, SC in 2007 and was the 2006 winner of the Cooper River Bridge Run competition - the first T-shirt and poster design celebrating the opening of the new Authur Ravenal Bridge in Charleston, S.C. Debra was the 2016 Artist-in-resident for Sleeping Bear Dunes National Lakeshore and South Carolina State Parks. She is the 2017 first place winner of the Glen Arbor Plein Air, Dexter Michigan Plein Air, “Golden Hour” for Northport Plein Air and the Harford Plein Air in Bel Air Maryland. She now resides in  Omena, Michigan in the summer and travels the country the rest of the year.