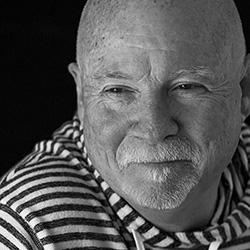 Steve's love of art started early in life. While other children would lament field trips to the art museum, that was his favorite day of the school year! Steve's mother bought his first 'real' watercolor set of six tubes of paint, when he was in elementary school and his love of watercolor was born. Growing up in a large family made finding time and space for painting difficult. Whenever possible Steve would steal away to the basement of his childhood home where he would paint but never show anyone what he had done. Steve remained a 'closet artist' until he attended Michigan State University and graduated with a degree in Studio Art. Steve later attended Art Center College of Design in Pasadena, California and studied Industrial Design. It wasn't until 2005 that Steve began to paint professionally, showing his paintings in galleries and juried art exhibitions. He currently has signature membership with Rocky Mountain National Watermedia Society and Colorado Watercolor Society.

Steve's earliest influences and inspirations came from the Great Lakes region where he grew up. Throughout his lifetime he has been enamored of boats. Sailing vessels, lake freighters, military frigates; any type of boat has captured his imagination. Although Steve has resided in Colorado for many years, his paintings often reflect his love of the Great Lakes, fostered by frequent trips to his hometown near Detroit, Northern Michigan, and Wisconsin.

In addition to boats, Steve also paints landscapes and cityscapes. Steve frequently displays and sells work in local, state, regional, national, and international exhibitions and galleries. He offers workshops, demonstrations, and salons, as well as individual and small group painting lessons to help other artists understand and learn his unique style. Steve's students range from the very inexperienced artist to the professional painter. His paintings can be found on Facebook, Twitter, and Instagram.

Steve is currently represented by Mirada Fine Art Gallery in Indian Hills, Colorado. He serves on the Board of Directors for the Colorado Watercolor Society and continues his early love of art.