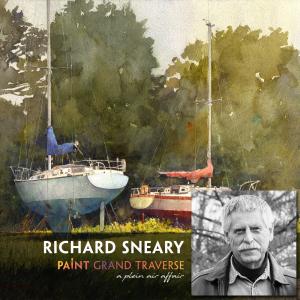 I started painting as a watercolorist, primarily en plein air, in 2011, after nearly forty years as an Architectural Illustrator and Architect. I’ve been drawing since I was 5 or 6 years old. Dogs and horses at first, later cars, planes, etc., and then buildings, which I still do today. Architecture was my first love, and has formed the foundation of my understanding of design, composition, freehand drawing, perspective, the built, the natural environment, and many other aspects of my professional growth. I became interested in plein air painting in the late nineties when myself and 50 -100 architectural illustrators would spend Saturdays at our annual conventions drawing or painting outside in some great places like San Francisco, Boston, Yellowstone, and other venues, and although I only got to do it once or twice a year, it peaked my interest. In 1997 I thought it was time I started learning more about watercolor and painting in plein air. Since then I’ve taken workshops along the coast of Maine with Carlton Plumber, in the Florida Keys with Jeanne Dobie, in Key West and Catalina Island with Charles Reid, in Victoria, Canada with Alvaro Castagnet, and at the Madeline Island School for Art on Lake Superior with Joseph Zubukvic and Herman Pekel. I’m sure it was both the excellent artists and the locations that hooked me, but either would have convinced me this was the way to paint! And so far, I have participated in some 50 plein air events all over the country, plus a couple of dozen more just-for-fun plein air paint-outs with many of my colleagues. I have had the good fortunate to paint with some of the best painters in the country, which has been a boatload of fun, and incredible learning experience, and a hell of a way to spend a day!

I am a signature member of the National Watercolor Society, Missouri Watercolor Society, Outdoor Painters Society, President Emeritus of The American Society of Architectural Illustrators (ASAI), and Artist Faculty at the 2016 Plein Air Convention & Expo in Tucson, Arizona.